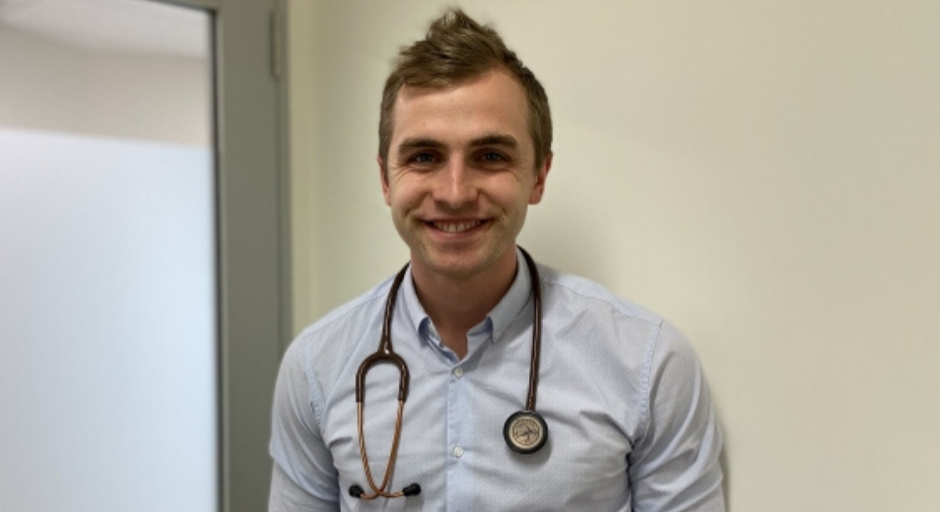 Dr Matthew Lennon is a Junior Medical Officer (PGY3) at Wagga Wagga Base Hospital (NSW, Australia). In 2019, he was Wagga Wagga’s Young Citizen of the Year and he’s the 2020 recipient of the Tim Fischer Monash scholarship.

He’ll soon head to the UK to develop his career and research – but in the interim, he’s made a big splash in the world of rural medicine. He was the lead author of Attracting junior doctors to rural centres: A national study of work‐life conditions and satisfaction. This is one of largest studies ever on junior doctor satisfaction, and Australia’s first national one.

Originally from Dural on the outskirts of Sydney, Matt pursued medicine because he was looking for a career that would allow him to “live life meaningfully.”

“It’s a dynamic career, where you can have a lot of different options; being involved in patient care, or sciences and research, or administration and teaching. All these pathways are directed towards a single aim of helping people to live better and more fulfilling lives,” he says.

During med school, he had the opportunity to live and work in the regional NSW city of Wagga Wagga.

“I went out there and I loved it,” Matt reflects, “I found that the senior clinicians are very invested in the juniors; there’s a great culture and a lot of opportunities – including in doing research. There’s a much better work-life balance.”

Medworld had a chat with Matt to find out what his research means for the future of medicine in rural locations – and why he personally loves life as a doctor in Wagga Wagga.

What do you love about working rurally?

First, the passion. There is such generosity and interest and genuine friendliness in the patients you come across. Particularly as a medical student, there’s a lot of generosity involved in a patient letting you take histories, or doing histories – that’s really helpful and you’re putting that extra burden on the patient, taking extra time to do those things and it is their generosity which allows you to train.

Secondly, the clinicians are invested in making sure people enjoy working in country areas. They need doctors, they need workforce replacement, which makes for a wonderful culture. People support one another, particularly in Wagga Wagga. When someone from a metropolitan area, has come down and has been less collegiate in their approach and interaction with other colleagues, the senior clinicians have always said to them: that’s not how we treat people in Wagga Wagga; we’re always polite and kind and we always deal with each other with respect.

That culture, coming from the top as well as the bottom, is really wonderful.

The third thing is the community amongst the junior doctors. It’s a factor of, everyone has moved here and almost everyone has moved away from family and friends. This means that the group of doctors and medical students that you meet here become your friends and family. That’s really lovely, it’s supportive and that makes a big difference.

What led to your interest in research?

I was interested in doing research when I was doing my undergrad. I think because Wagga developed a reputation for being a good training centre, it has attracted a lot of good people. I had worked with Dr Preddy (the head of the clinical school here), and I had had a lot of interaction with the MABEL study, which a lot of my research was done through. It was just a coincidence of interests. I said: we should do this, we should look in the MABEL study, which is well established, and look at what the results for junior doctors in rural areas and urban areas are like, and what satisfaction is determined by.

I developed a couple of projects and the analysis and the data took a very long time to write up, but once we had done it, it was pretty robust, with really interesting results and I felt very supported by the other doctors here.

What does your research tell us about working as a doctor in a rural area?

On the metropolitan side, they were significantly more satisfied about having family and friends nearby. But particularly, for the ones who had partners, they were more satisfied that their partners had friends and family, access to work, and their children had access to appropriate childcare or schools.

That’s the tricky point when it comes to attracting people to rural and remote areas. We know that the number one determinant of where a doctor will work is where his or her partner is from. We can see that JMOs think about that and urban JMOs generally say: my partner has more work, family, friends and my kids have access to school here. That’s a big pull factor for cities.

Overall, what would you say to a medical student thinking about working or training in a rural area?

There’s a story about a doctor who is a GP in a rural town not far from here. I’ve never met him, but the story exemplifies what it is to be a rural GP in a small town, or a doctor in a rural area.

He had kids at the local primary school. It was 3pm on his day off when he had a call to say that there’d been a bus crash and they needed him to go there and help with the emergency response. He got there and started to triage these kids who were very sick and he found that his own child had died in the bus crash. He had to leave his child there, because he needed to look after the children who had a chance to survive. It’s a tragic story. But it exemplifies the commitment he had to his small town and to the people of that town.

Working in rural areas, your job often crosses personal boundaries. You will treat people that you know. That involvement in the community and that commitment to your community means that your work is so much more rewarding. Particularly because, in these smaller towns, if you weren’t there, there would not be anyone. You're making a deep difference.

It is a vocation. It is a career. It is very rewarding and it results in living a much better work-life balance and having a much more dynamic career, you’re not super sub-specialised like you would become in a city. You work on lots of common things, but also the really rare, interesting things that you wouldn’t necessarily see if you were a super-sub-specialist based in a city.

You can read Dr Matthew Lennon’s research here and here. A positive message for medicine, Matt’s research shows how the industry can promote and encourage better lifestyle and career options for junior doctors.

This interview has been edited for brevity.