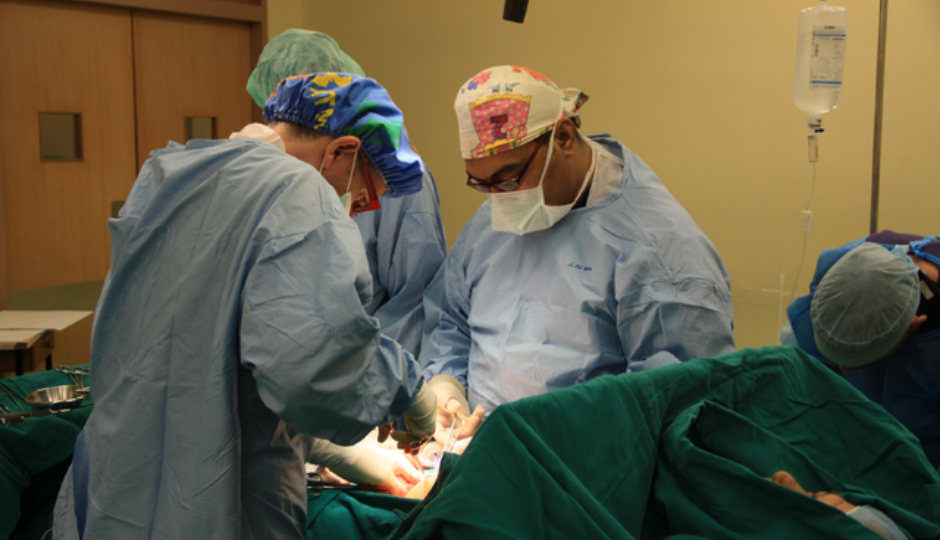 Dr Philip McCahy says he never wanted to become a teacher. His parents were both teachers so he decided, “straight away, that option was out of the window!”

Ironically, teaching others has become a defining part of Dr Philip’s career, albeit in a very different field to his parents. He’s a consultant urologist and Associate Professor at Monash University in Melbourne and has been heavily involved in teaching trainees in Australia and the UK.

Since 2013, he’s been involved with the Pacific Island Programme, with the Australasian Royal College of Surgeons and funded by the Australia Department of Foreign Affairs. He travels to areas like the Solomon Islands and Tonga to treat patients and help upskill local surgeons.

“I’ve always had an interest in working in developing areas,” he says.

“In my last two years of training in the UK, I was involved in Urolink. The idea is, you send people out to developing areas which have poor urological facilities and you try and help them […] I went to Tanzania to the Kilimanjaro Christian Medical Centre, it’s a beautiful place and it was a fantastic experience so when I got to Australia, I looked for similar opportunities.

“I got roped into the Pacific Island Programme and I have been going out to the islands since 2013. This year would have been my tenth visit, but that’s been hammered because of Covid.”

“It’s a very cheap way of getting good health care to places where they might struggle.”

Problems with stones are common in the islands, he says, and he and his colleagues often provide advice and research via phone and email during the year. He does keyhole-type operations, which heal quicker and remove stones more effectively than the more common method on the islands, which involves making a large incision across the groin.

“We keep in touch throughout the year and try to keep the service going… providing advice and research and preventative things. The people who work on these sites are amazing; they really are general surgeons, they do anything that comes their way, so we try to help improve their skills.”

Dr Philip’s own teachers and mentors were behind why he became a urologist. He did his training in Newcastle-Upon-Tyne (UK) and began to focus on general surgery.

“I was going to become a general surgeon and did two or three years of that in my training, then did six months in urology as part of my rotation. Everyone I worked with in that job, at the Freeman in Newcastle, was very supportive and kept asking me: do you want to do this? Would you like to be one of us?”

Dr Philip’s colleagues and seniors included George Alberti who went on to advise Tony Blair’s government and Mike Rowlands, who helped set up National Institute for Health and Care Excellence (NICE). He’s kept in contact with many of them over the years.

“Half of them are dead now, but they’re still my surgical heroes. A friend of mine who I see a lot of (he’s still in the UK), told me at the time that I’d never work in a better hospital and he’s probably right.”

“[…] Of my two bosses in urology, one went on to become a professor at Cambridge, the other, a professor at Oxford. It was just full of top-notch people and I think the way the health service works in the UK, and particularly in Newcastle at the time, there’s not much private work. Everyone who works in the system is dedicated to it and they’re all working to the same end… whereas in Australia (more so than in NZ) private practice tends to pull people as it’s much better rewarded and I think they’re just not quite as dedicated to their public hospitals as we were back in Newcastle.”

Dr Philip was eventually pulled to Australia. He married an Australian and in 2007, he felt “the writing was on the wall for the NHS”. He’d worked at Monash before and was using his old boss as a referee when a position became available in Melbourne, so he made the move to Australia.

When teaching, he’s strived to emulate his own experiences of excellence and encouragement;

“I’ve always enjoyed teaching, I do regular surgical teaching at Monash… I do remember my own teachers and the ones who made a difference. I could tell you exactly, from 20 or 30 years ago, the teachers I remember and the ones who made a difference in my life. I think you remember who did a really good job and I think you take the better parts of what you saw and you amplify that.

“I don’t want to sound pompous, I just want to chit chat with the students and share information and hopefully they enjoy it. If I can push a few people to a surgical career, then great – I like to push people towards research too. I think if they have an interest in research and they keep doing it, that will be beneficial to everyone.

“It’s all part of passing it on, passing on the skills and the enthusiasm.”