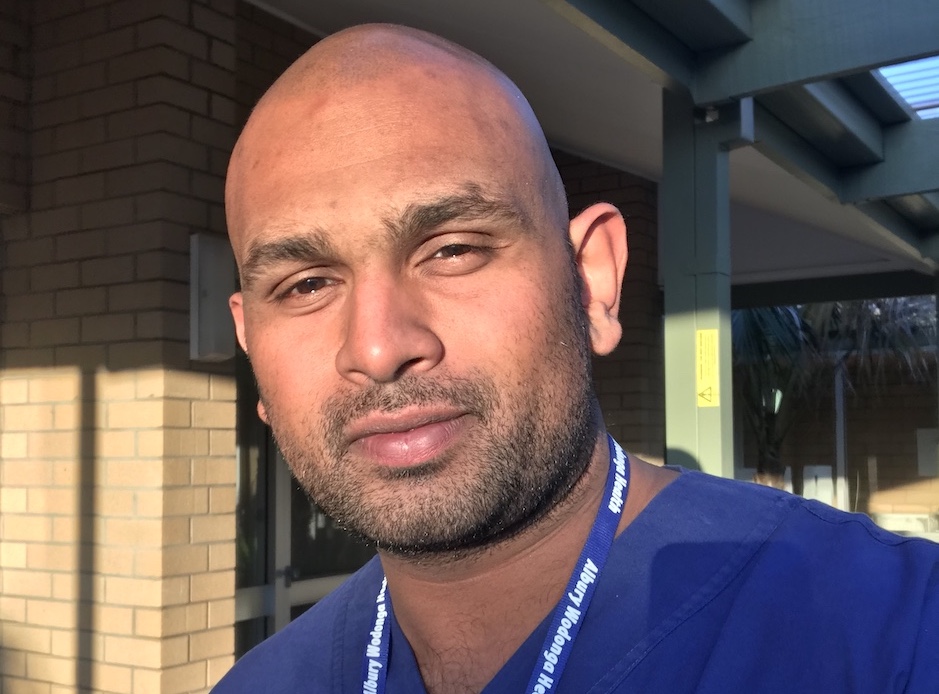 Dr Cham Ariyasinghe is a registrar who’s been working as a locum in a Covid-19 clinic in Wodonga, Australia since it first opened in early March 2020. It has (for the most part) been a positive experience, with innovation and teamwork helping the hospital to deal with an increasing number of cases.

Speaking to Medworld a few nights before he was due to fly to Syria on a mission with MSF (Doctors Without Borders), Dr Cham reflected on his time on the Covid-19 frontline.

Formerly training in radiology, he started locuming in August 2019 to explore other career trajectories. A placement in a Covid-19 clinic was both topical and timely; “It was interesting because I did want to spend some of this year doing international aid work and I was really interested in outbreak medicine anyway – things like Ebola and swine flu and public health emergencies,” says Dr Cham.

When he first arrived in Wodonga on 7th March 2020, Dr Cham and the team tested around six to eight people per day.

“Literally seven days later, the number of cases we were testing had doubled and on the tenth day we were opening a drive-through clinic. And it was really about working with every staff in the hospital – we worked with engineering to work out logistics of setting the crates up (three shipping containers with a rafter over the top). It’s exposed to the environment which is essentially how testing should be done – you have to avoid closed areas and have a lot of ventilation.

“This is what we’ve seen in Asian cultures like in Korea and one of my colleagues had had some experience in the Middle East during MERS and they thought this would be an ideal setting as well.”

Other logistics, like managing clinical waste from the high amount of PPE used, had to be figured out too. One of the nice things that came out of this, Dr Cham says, was that there was no “bureaucratic slowness”.

“When there was an obstacle, it was removed very, very quickly. Processes got changed quickly and everyone was informed that it was changed. Our screening criteria became different immediately, so there was a lot of new information being learned very quickly.

“It was really inspiring to see people adapt. We had a lot of nurses who weren’t all that savvy with testing people or donning and doffing PPE. Nurses who were usually in community health or palliative care who were learning lots of different new skills like getting on the phones and getting used to triaging patients with respiratory illnesses over the phone and directing them to the emergency department when they were concerned. As well as getting involved with swabbing and infected cases as well.”

Testing was done at first in the hospital’s in the make-shift drive-through clinic and it wasn’t long before they had their first positive case.

“There have been some pretty stressful times. We had one of our Covid-positive patients die and I think that really brought the reality home that this is a very significant respiratory viral illness and that people can get very sick. The rapidity with which they deteriorated was alarming. Even then, that was another learning experience to plan for future cases, to make sure we deal with high risk, maybe older patients, in person.”

Special patient groups like paediatric patients or patients who could not self-isolate properly (due to social reasons, or limited understanding) also proved stressful for the team. Aiming for the best possible care for all, they had to work closely with Public Health to figure out responsibilities.

“As a job, it was a really good introduction to practicing medicine in a changing environment. […] It's a space where you have stay up to date with everything but you also have to be willing to change your practice and keep rolling with everyday challenges. Now we’re at a point where the clinic is nurse-led and there is a doctor – either myself or a colleague to troubleshoot major issues or occasionally to do some swabbing to relieve different staff members.

“It started with six people per day through the back of the hospital and now it is 45 – 50 patients per day… it’s probably one of the most interesting locum jobs I have ever done.”

Managing people was another challenge. Dr Cham says “A lot of interesting behaviour comes through when people have to bring their cars to a clinic…” – a nod to one woman who insisted on bringing her vicious-looking Chihuahua to the drive-through clinic.

At one point, nurses at the clinic handed Dr Cham a home-made certificate of appreciation after he moved four broken-down cars from outside of the clinic within a ten-day period.

“I got really skilled at pushing cars,” he jokes.

Talking about the positives of the situation, Dr Cham said “I think people will continue to amaze me”. The local community has rallied together to protect vulnerable people and many people have returned to healthcare work to help.

“Nurses have really rapidly evolved with different skill sets to really help the clinic in different ways. The support networks are so interconnected now you have the infectious diseases consultants on a very similar level to the nurses in the clinic and everyone is working as a big team and I think that’s one of the best things that has come out of the clinic. It’s one of those experiences that you, as a team, acknowledge a common humanity. Everyone accepts additional risk, additional hours.”

“It’s hard to put into words… but it’s a little like those pictures people are putting up online of people in the war time, people are sucking it up and being very stoic, being safe and working very hard… it’s interesting.”

As Australia begins to get ahead of the curve, Dr Cham Ariyasinghe is about to take his skills and experience to North-East Syria. He’ll be operating a Covid-19 clinic in a national teaching hospital, based around a refugee camp.

“I have always wanted to do aid work because I think there are lots of parts of the world that I feel are totally forgotten about and there’s a huge amount of need in a lot of places. It’s not that I’m doing it for the gratitude, I just think there’s something really nice about helping someone that is down and out and being able to provide some level of assistance.”

Best of luck from all of us here at Medworld.