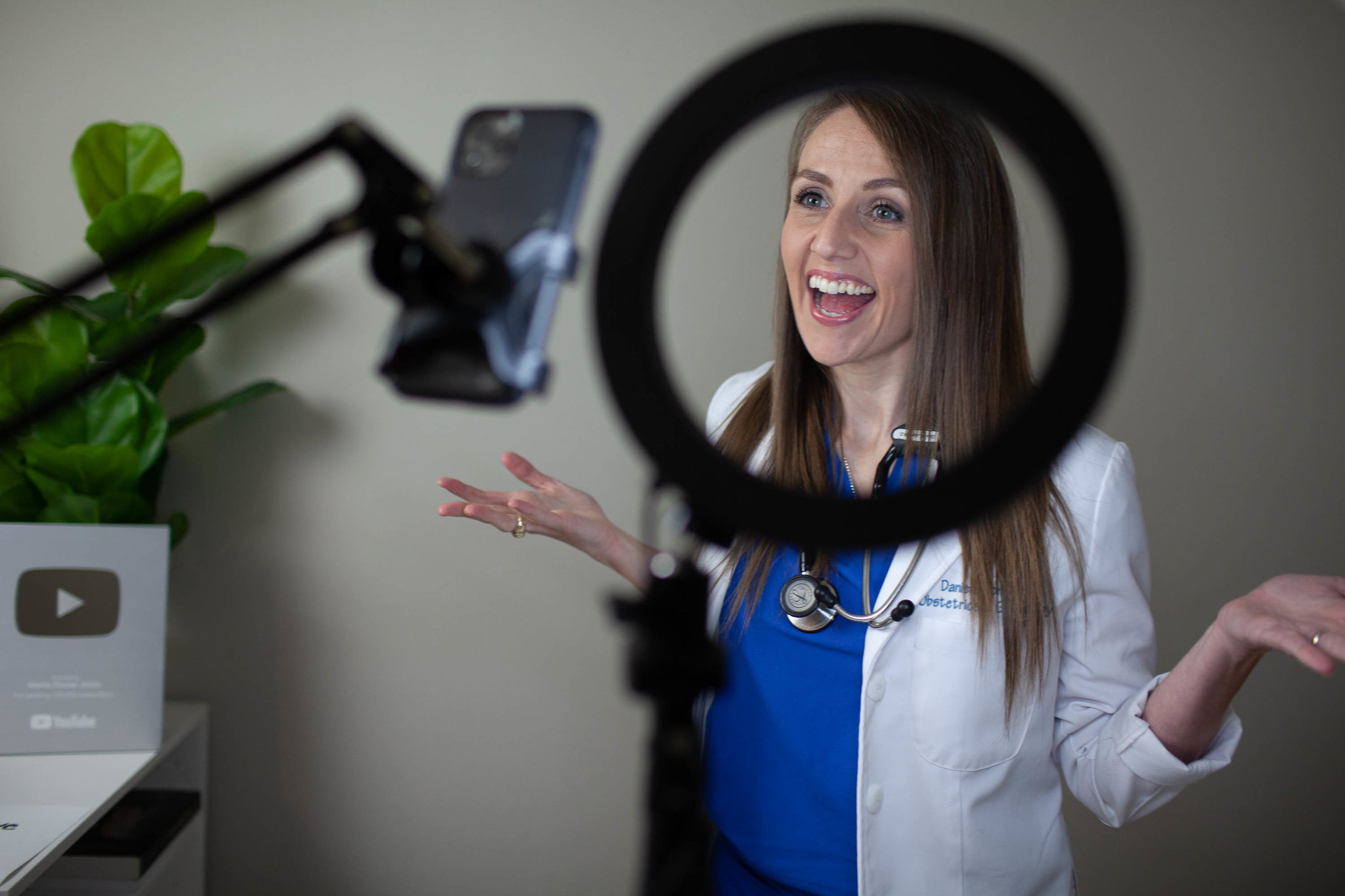 Dr. Danielle Jones, who is known online as @mamadoctorjones is a multi-channel social influencer with a couple of million followers. She’s an American (OB/GYN) but is currently living and working in Southland in New Zealand.

With the recent decision in the US to overturn Roe V. Wade we thought that as a former US doctor who practised in the state of Texas, and gynaecologist it was important to get Dr Jones back onto the Better Together podcast with Dr Sam Hazledine to discuss this decision and what it means for women in the US, and what those outside of the US can do to help.

Listen to the full podcast:

On the 24th of June 2022, the US Supreme Court ended constitutional protections for abortion that had been in place for almost 50 years in a decision by its conservative majority to overturn Roe v. Wade. At the time of writing this, the decision has led to abortion bans in nine of the 50 states, with a prediction of more to follow.

“It’s obviously concerning for a lot of reasons, but the primary reason is that it's going to lead to worse outcomes,” explained Danielle.

The decision, which seemed unthinkable to many Kiwis, was the culmination of decades of campaigns by abortion opponents, made possible by an emboldened right side of the court that has been supported by three appointees of former US President Donald Trump.

When the decision broke, Danielle and other doctors took to social media to share their outrage.

“We know that banning abortion does not make anyone safer. It only increases the riskiness of procedures that people seek and delays care to a point where abortions are happening later and later because of inability to access care earlier in the pregnancy”

Dr Danielle Jones grew up in a very conservative area of Texas (one of the states who supports the ban).

“I didn't get to come to a conclusion about things like this on my own...I felt like I was given my ideas and opinions about it as I was growing up.”

Now Danielle has a platform and a voice. "It became more and more important to me as I got to a place online where I had a voice and where I was in a space where it was safe…It took a long time to really unlearn and then re-establish my own feelings on this topic….I've been given a platform and I hope to use it for the right purposes.”

When it comes to advocacy, Dr Danielle Jones says that using her voice for education is her number one priority.

“I work in a field where a lot of things that we do are very taboo people, aren't often taught about sex-ed about their own body, about abortion, about seeking abortion in times of dire stress.”

Danielle wants to be an educator on the internet, but also someone that can reliably convey scientific and evidence-based information in a way that people actually want to consume it.

“I think to really get your point across you have to be able to explain things in a way that doesn't bore people in the process.”

Since Danielle started speaking out on the Roe V. Wade decision she has got comments from her fans saying “I really like your content, but you're too political now”

She explains, “I will stop talking about politics when politics is not in my exam room with my patient.”

“I didn't choose for politics to come in and start messing with how I can take care of my patients. They forced us into that, and I won't be silent because somebody else has made it my problem. So I will always continue to talk about anything, including politics, as long as it affects my patients.”

Danielle admits that because of her platform, she often feels pressure to speak out about these things “a voice says, it's your duty, you need to be speaking about this to other people who are silent”

Living in New Zealand, it’s easier for Danielle to have a voice on these issues, but at the same time she remembers what it was like for her in Texas.

“I can put myself back in a position where I had a private practice in Texas. My literal safety and my patient population were threatened by me being open about how I felt or advocating for topics, like this, that were not acceptable in that environment.”

So she thinks where doctor advocacy is concerned "we have to deal with the issue of, are you safe speaking about it?”

“I think that, part of the problem that the United States has right now is these stringent boxes, because I will often hear people say, I'm pro-life, I vote pro-life but if you want to have an abortion, that's not my business....So I don't like the labels. I'm not here to tell anybody what the ethical choice would be or what I would do because at the very end of the day, it doesn't matter what I would do. I have a lot of money, I have a lot of social support."

Dr Sam Hazledine agrees that these “labels are problematic.” “Let's call one pro-life because it feels hard to not be pro-life doesn't it?” It suggests that if you're not pro-life you’re pro-death. I mean, what are you?”

Danielle says that Sam has “hit the nail on the head.” “It was an intentional politicisation of this topic during the Reagan administration. It was intentionally made to be something that was clung onto by religious people, and before that most churches were not either stringently opposed or in support of termination in general. It was just thought to be an individual's decision that had no place in day-to-day conversation. And it intentionally was made into a political pond to win votes after the Reagan administration.”

Danielle opens up about how tough it has been. Since speaking up about abortion rights she has had to ignore comments calling her a murderer (among other things).

What gets her through all the negativity is telling herself that it is nothing in comparison to her patients and what they have to go through.

“I had a patient when I was working in Texas who had a lethal fetal anomaly that wasn't diagnosed until 20 plus weeks, and it was cheaper for her to fly to Colorado, have her termination done there, stay in a hotel and fly back, then it would've been to get care in Texas. So these are the, you know, that pales in comparison to me having to listen to a bunch of nameless facial city idiots, call me names on the internet.”

Danielle feels that these new laws won’t affect privileged Americans in the same way it will affect the lower-socio.

“I don't think these things will ever affect the people who put them into place, the politicians, their wives, their mistresses, their daughters, they will always be able to access a termination if they need it, because they can just fly to another state.”

She explains, that some low socio-mothers living in a state like Texas may not have these options.

“ It would've been a 10-hour drive to get to another state and that state may also not be offering abortion and not to mention they may be completely overloaded in their ability to care for people. So you can expect people to be able to take a week off work when they're already at a socioeconomic disadvantage, they're living in a place where they can't tell anyone why they're taking off work because they will be labeled as a murderer and just ostracized from their community. This is impractical, of course, this isn't an option for most people.”

She goes on to express her concerns around "the LGBTQ community and the ability of transgender people to access care and the ability of gender dysphoric children to access, puberty blockers, which is a very evidence-based and safe intervention that has a lot of science behind it.”

“And now, you have political leanings coming in and trying to dictate how people get their medical care; it's absolutely insane!”

"I can't even hardly talk about it without getting frustrated because the amount of science we have on these topics and the importance of the ability to access care for both of these things is so evident in the literature – that it just boggles my mind!”

How can doctors help advocate

"I think from a standpoint of having been there, that things that I could have done better when I was working in a place like Texas where my patients can get access to care, was making sure that everybody who walked through my door knew that they were in a no-judgment zone and that they could talk to me about whatever they wanted."

Danielle stresses the importance of making your practice a safe place. “I had the experience of working in Texas and then moving to Hawaii to work there for a little while. Hawaii is much more liberal than Texas and seeing how freely people came in and expected me to be a safe place.”

If you are a doctor in America, practising in one of the states where a ban is in place she suggests “educating yourself on options and how to direct your patients to your front desk staff, because people are going to be getting phone calls about, can I come there for help? And obviously, the answer is not now, but needing to be able to give them well, here are your resources, here's what you can do.”

For New Zealander's and New Zealand doctors she urges not to be complacent. “64% of the more conservative group of politicians (National) here voted against the legalisation of abortion rights.”

“New Zealand is not safe. Don't get complacent, you have to get out there and use your voice.”

Other than that Danielle suggests “just continuing to speak out” is the best option. “Unfortunately, probably what it is going to take is somebody who is white enough and rich enough having a bad outcome (or losing their life) for people to realise that this was such a bad idea.”

“And unfortunately, before we get to that point, I think it will take a lot of people, who don't look like that, to suffer even worse outcomes before we end up having changed.”

Danielle describes herself as "a relatively positive person', but since the decision “it feels a little bit hopeless…It feels like something really terrible’ s going to have to happen before we make actual revisions.”

Despite this, she remains focused on the difference she can make day-to-day on the ground as a doctor. “Taking care of patients, and being in the clinic is what makes me feel like this is still worth it to be in this field despite so much contention.”

Finishing on a positive note, Danielle loves working in New Zealand. “We are very short-staffed, but we have such amazing midwives and specialists here. And I have very much enjoyed my time so far. I've been working here for the past eight months and it's awesome. And I have so many wonderful colleagues and friends and my kids have made a little Kiwi village around here and we are just so thankful for how openly we've been welcomed into this country.”