MENU
Doctor stories
June 16, 2022
< back
Dr MeiLan Han on how you can give others the gift of information 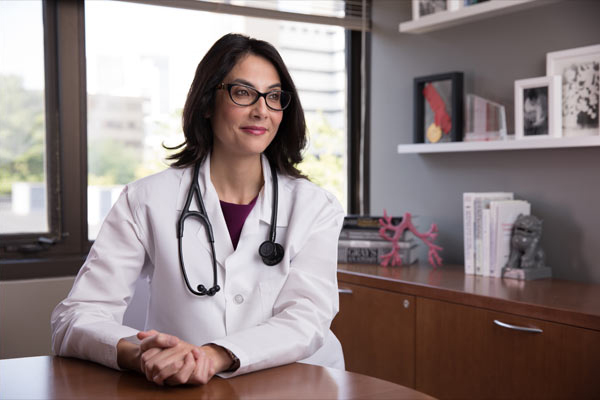 Dr. MeiLan Han is a very busy doctor. She is a Professor of Medicine in the division of Pulmonary and Critical Care at the University of Michigan. She is an accomplished physician and she's also a researcher and also an academic. She's taken a prominent public advocacy position, and as part of that serves as a Spokesperson for the American Lung Association. She is currently an Associate Editor for the American Journal of Respiratory and Critical Care Medicine and serves on the editorial boards of Thorax, Lancet Respiratory Medicine, and the Journal of the COPD Foundation. She is also a member of the Global Obstructive Lung Disease Scientific Committee, which is charged with developing internationally a recognised consensus statement on COPD diagnosis and management.

Even with all this going on she found the time to impart some wisdom to Medworld founder Dr Sam Hazledine on his Better Together podcast.

Dr MeiLan Han grew up in rural Idaho, and she volunteered as a Candy Striper at the local hospital. “Because of the rural location, it wasn’t very heavily regulated. And I got to do pretty much everything. Assist in the emergency room. I was there for codes and procedures, and I thought it was one of the most exciting and thrilling things that I'd ever done.”

After this experience, MeiLan was hooked. “One of the things that I still value most about medicine, I think that there is so much value in the work and you can feel good about, you know, doing something that's interesting, exciting, and at the same time, you're really helping people.”

Listen to the full podcast:

Variety in career for combatting burnout

Michigan where MeiLan now lives is just in the middle of its fourth stage of Covid. “I actually took over as chief of the division here at the University of Michigan in January. And so, I like to think of myself as sort of like, the shepherd in chief.”

MeiLan explains how the effects of Covid on staff burnout have been “brutal.” “Many of my faculty, particularly; unfortunately, female physicians, I think, have really had it the worst because of childcare impacting them even more so and not being able to get their work done and things like that.

She feels fortunate that in academics, in particular, she has been afforded a lot of flexibility and that’s one of the things she likes about her career path.

MeiLan says she has been lucky enough to find a variety of career avenues to focus her energy on and this has protected her, in a way, from experiencing burnout.

The secret, she says, is to keep reinventing yourself.

The importance of finding the joy

"I guess maybe I'm an optimist, but I'm always excited about what that next bend around the corner is going to be."

For MeiLan, it’s about finding joy in every aspect of medicine - and this comes down to perspective. For example, when she writes an academic paper she looks at it as a creative process, “even being in something that seems sort of as cut and dry as research…It's how you present the data, how you get that message out, and how you help it have an impact.”

She explains that it is about finding places where your passions align. For her, this is in the space between medicine and helping other people.

She says it is about having a philosophy or core values around what’s important to you in place and then keeping yourself open to the universe.

“Have I always gotten every job that I've wanted or whatever grant that I’ve applied for? Is every paper I've submitted not accepted? Of course not - But ultimately, yes, I have very much learned to enjoy the journey.”

Advocacy and her book Breathing Lessons

MeiLan’s first foray into lung health advocacy was 10 years ago, when the American Lung Association approached her to be a spokesperson for them.

“There is a part of me that every time I hear someone say she's an advocate or social media this, I cringe. Because that's so anti-my usual nature.”

Despite this stigma, MeiLan believes her cause is worth pushing aside these feelings and fighting for.

“One of the things that drove me to enter pulmonary medicine in the first place, is that at least in the US, many of the patients who have chronic lung disease, tend to be socioeconomically disadvantaged; they live in rural areas. And I'd always sort of had a heart for that patient population.”

MeiLan found herself with a group of patients who were really struggling. “They weren’t getting funding, we didn't have cures, and somebody needed to help be a voice for them. And so, I think that was ultimately what got me to just sort of my frustration around the issue.”

She explains that in the United States pulmonary doesn’t receive a lot of attention or any public health funding.

“We don't screen for the disease. We don't create drugs for diseases. And even now with the corvid-19 pandemic, despite that, little has gone into understanding lung disease.”

“Everything that we saw played out in millions of people across the world during the pandemic, I think we could have done better. So, I think the pandemic, sort of helped to confirm my resolve on the importance of this issue but at the same time, there is part of me that still cringes a bit. “

Helping patients is MeiLan’s “true north,” and this inspired her to impart the gift of information to her patients in the form of a book she wrote during the pandemic called Breathing Lessons

"It explains to patients how their lungs work, but also, the whole last chapter is all about kind of the crisis of lung health and where we're at right now, and what we need to do to move forward.”

Medworld believes that harnessing the collective intelligence of the medical profession could be the answer to healing from within, and MeiLan believes that everyone has their own zone of genius that we can share with others. She explains that when we impart that wisdom to others it is like giving them a gift; the gift of an idea.

MeiLan says to think about the way you frame the information that you are passing on as if it's a gift, when Sam tells her of Medworld's mission she agrees "I love this idea of doctors being able to share their own, you know, sort of nuggets of wisdom on a central site so we can all learn from each other."

She goes on to explain the importance of sharing information within the profession. "You can only learn so much in medical school, but I think 99% of what we learn about being a doctor and how you diagnose and just that art of medicine comes from just doing it and being with patients one-on-one."

"I think the main message to my younger self would be not to not stress out quite so much, to not be quite so anxious and to realise that, you know, there's so much room in medicine for so many people to make different kinds of contributions. And everyone will ultimately kind of figure out their own path."

Then to conclude he asks "how do you want to be remembered?"

"You know, it's funny. Someone asked me recently if I thought I was successful. And in many ways, I actually don't feel particularly successful, in that, I think I measure my own success in terms of winning hearts and minds. And I don't always win the hearts and minds of my patients in terms of convincing them to adopt healthier behaviours or take their medications. But you don’t want to on a more, you know, health system-wide level or a health policy level. There is still so, so much work to be done. So, I don't know what dent I'll be maybe able to make, but I'm hopeful that I would be remembered as having made some dent in something.

And make me something a little bit permanently better. And so, I don't know which of my multiple swings at the plate will ultimately have an impact, but I pray that one of them does. "