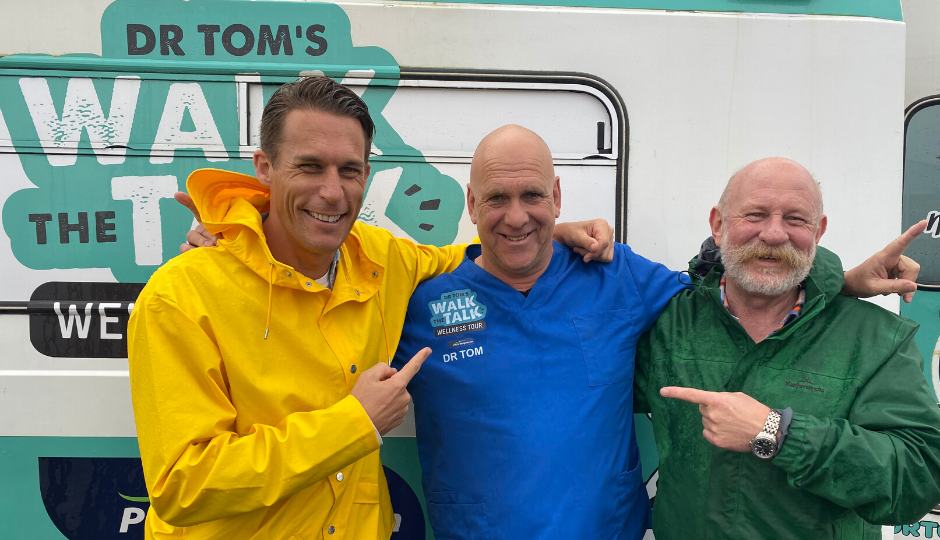 Dr Tom Mulholland is on a mission.

The ED doctor left the emergency room five years ago to become ‘the ambulance at the top of the cliff’.

He says that too often, the people he was treating at the emergency department were suffering from preventable diseases and illnesses. By the time they reached him, it was often too late.

Dr Tom now travels New Zealand in his converted ambulance meeting and treating people who typically don't prioritise their own health. He encourages people to “find out their numbers” (from their heart rate to mental health stats) and to measure, monitor and manage their health via an app called KYND.

Many of the people Dr Tom has talked to on the road so far are based in rural locations, working in industries like farming and forestry. But there’s another group who are notorious for not attending to their health and wellbeing: doctors.

"doctors to realise that they need to put themselves first"

“Doctors are worse,” says Dr Tom, “We often don’t have our own GP.”

“I recently interviewed a GP from Auckland. He never had his own GP and he ended up having facial cancer. He nearly died. He’s had to have all of his face reconstructed.”

The GP is Dr Andrew, a friend of Dr Tom’s from med school. Dr Andrew says he sometimes noticed a streak of blood after wiping his nose. But he brushed this aside for two years until he noticed a small lump next to his nose. He eventually visited a doctor which led to him receiving a diagnosis of head and neck cancer. In his interview with Dr Tom, Dr Andrew says he feels “lucky to be here” after multiple surgeries and cancer treatments (you can listen to the full interview here).

Dr Tom notes that being “opportunistic” is another trait of doctors.

“We often try to get mates in. You might ring a friend. And what I’ve heard anecdotally, from cardiologists and stuff, is that they’ll try and treat themselves. They’ll sit there with a heart problem and some doctors will prescribe themselves a statin or something like that and then they’ll have a heart attack – there’s certainly cases of that. They’ll try to treat themselves, but not like they would a patient.

“To extend that, the families of doctors tend to have the worst treatment because we tend to ignore their symptoms and go ‘Oh, that’s nothing,’ but it IS something, you know?”

Dr Tom reminds us that doctors aren’t special – we have the same human bodies and we need to seek help too.

“At the very least, get yourself an annual check. Take yourself out of the equation and go and get another opinion.”

Dr Tom on a mission

"some days, when it is pouring with rain and I'm in a forest, I wish I was back in an emergency department, close to the coffee cart on level three"

After a brief hiatus during the Covid-19 restrictions, Dr Tom is back on his mission visiting communities across New Zealand.

From talking to people in remote communities, to checking the prostrates of television presenters Jeremy Wells and Mark Sainsbury on TV show 7Sharp, it’s been a quite a different experience to working in the ED.

“Some days, when it is pouring with rain and I'm in a forest, I wish I was back in an emergency department, close to the coffee cart on level three. In a hospital, you have shifts that you can come home from and forget about everything… whereas when you’re on the road, you’re always following up with patients and it is really hard to switch off.

“But it is very rewarding. Especially for me. It’s good to know that you’re picking stuff up early and you save more lives being on the road than you do in the ED – that’s my belief.

“People say, ‘it must be really exciting working in an emergency department, saving people’s lives’. But it’s not like that really. Especially when you’ve done it for 30 years. Because the thing is, often you’re not saving lives, you’re just extending them because the damage has already been done.

“So I’m trying to save more lives by picking up people’s blood pressure – and we’ve picked up hundreds of people with really high blood pressure – think of how many strokes and heart attacks and diabetes that we might have prevented.”

Dr Tom adds that his message to other doctors is to “know your numbers”. Prevention, even if that’s simply an annual health check with your own GP, is better than ending up in the ambulance at the bottom of the cliff…

“Doctors often don’t know what their own health numbers are, or what their mental health is like and that sort of thing. Check in, have a look.”