MENU
Doctor stories
September 17, 2021
< back
“I wanted my presence online to be like if your best friend was a gynaecologist and you were talking about pap smears” 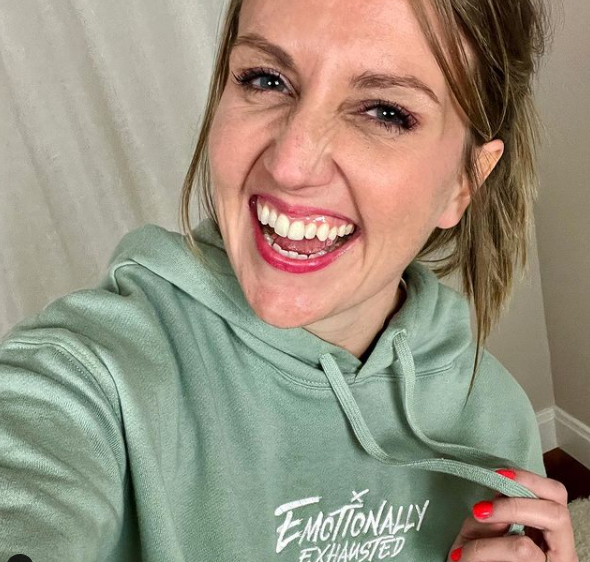 In this amusing and informative episode of the Better Together podcast, Dr Sam Hazledine finds out how Jones has built such a large and loyal following and uncovers the steps for other doctors looking to create a platform.

Dr Danielle Jones’  journey into medicine went a little differently from that of her peers, she originally planned to go into psychology, until she realised that it wasn’t for her.

“At the same time as I had this realisation, my dad was experiencing some complications and needed a lung transplant.”

When her dad was very sick, Jones sat at his bedside where she experienced a deeper calling.

“I just looked at the people and thought the difference between good healthcare and bad healthcare is how it’s delivered, and I thought...I could be a good deliverer of healthcare.”

She realised that she could learn science, but she also wanted to be a genuinely good doctor. “I wanted to learn to provide good care to families who are going through things that are terrible or sometimes wonderful.”

After this Jones decided to apply to medical school and that is how she ended up where she is today.

“I hope Jacinda is going to be my best friend!”

Jones and her husband first visited New Zealand in 2011, after that they fell in love with the country, and decided to make the move over one day.

“We came back again with the kids and rented an RV to travel the South Island. The kids loved it! We really fell in love with the culture, the lifestyle, and the people, and the things to do outside, so we decided to try and make the move. “

Due to the pandemic, the prospective for getting into the country was low, and Jones faced many roadblocks on the way (including the whole family catching Covid-19!).

“The Invercargill job opened up and I applied. The people at Southland Hospital were wonderful and seemed like great people to work with which is why I ended up accepting the job.”

Dr Danielle Jones got into social media back in 2009, “it was very odd back then as a medical student to be blogging your way through med school or to be on Twitter.”

She felt that back then it wasn’t socially acceptable for doctors and that her peers found it unusual.

At this time she didn’t have a goal for the account: “It was a creative outlet. I liked to write so I just wrote about my experiences and I quickly realised that Twitter was a really great place both for learning and for connecting.”

Jones describes her social brand as “edutainment.” It is meant to be entertaining and you leave having accidentally learned something.

Jones took a break from social media to have her twins and work, then in 2017, she started up again on Instagram under the Mama Doctor Jones brand. “My goal was really just to educate, and to advertise my practice - really quickly I noticed that there was a lot of growth happening that I hadn’t anticipated.”

When Jones realised she was onto something, she started making goals, and that’s when she started the YouTube channel.

“I did have goals when I started YouTube, but I never thought it would be what it is today -  almost a million subscribers it’s insane!”

Tips for other doctors looking to grow a following

Niche down: figure out who you’re talking to and then what you are going to talk about comes pretty easily. It doesn’t have to be one health topic, it can be an age, I talk to 20 - 30-year-olds. Try inventing an avatar for your niche, and structure every post just for them.‍

Do it for the love: the reason why I have been so successful is that I have a genuine interest in social media marketing! You have to enjoy it. Find something you love talking about, learn the platform, learn the algorithm, learn the community!‍

Up-skill: I listen to podcasts about how to be successful on the platforms I am using.  ‍

Keep showing up consistently: sometimes people start and they don’t keep showing up because it is a thankless job in the beginning, but you need to keep going if you want to grow a following. ‍

Create valuable content: If you create content that is valuable for the person you are talking to you will grow your platform.‍

Don’t try to be everywhere:  I wouldn’t start out trying to be everywhere, it’s too much work. Start out on one platform and then once you are comfortable on there you can branch out onto a new platform. ‍

Never fight in the comments: always take it to your platform if you want to debunk something. Sometimes the comments are like a red rag at a bull but it never ends with you feeling like “that was worth my time.”‍

Find your community: The OB/GYN community all support each other and we are all friends, it’s not competitive. ‍

You can learn from fake medical influencers: I follow some of the accounts that share misinforming medical information because they seem to be able to create content in a way that makes people want to push it out and share it. I learn from them. I also can use them to create content by debunking their myths. Often these fake medical influencers are actually selling something: “everything your doctor didn’t tell you!”

For more tips on growing a social following listen to the podcast here:

The benefits of social media: ‍

“Social media could never be a replacement for clinical medicine because I love being at the bedside, but I do feel that social media is much better for reaching way more people than you ever could on a clinical basis” explained Jones.

“A single post reaches more people than I would ever reach in my clinical career which is a huge opportunity and a big responsibility.”

Jones is able to spend time on social media discussing topics like the Covid-19 vaccination and safety in pregnancy which is valuable to people who aren’t getting enough information from their time at a clinic visit and need a place to go where someone could actually sit down and explain the science.

The downside of social media:

Jones explains how right now there is a lot of hate-fuelled posts towards doctors, especially people talking about Covid-19 vaccinations and you need a thick skin to deal with these.

“People are saying the Covid-19 vaccine is going to take out the whole planet because it is meant for population control, but why would they want to take out their entire country? What good would that do? They won’t have people who are able to work. They won’t be able to do anything! This is capitalism -  they don’t want to kill you!” Jones laughs.

Jones admits that sometimes she struggles with decompartmentalising “I am constantly checking messages. I used to try and respond to everyone but now I just do my best. I get 1-2 thousand messages a week and that doesn’t even count comments.”

Jones explains that her “edutainment” style is not the same as some other doctors on social media, and it does sometimes negatively affect the kind of media opportunities she gets because they want the “serious doctor.”

“I am not the uppity doctor on CNN, but I feel like my reach on a person-to-person level is so much greater that I don’t care.”

Jones has one assistant who helps her with Facebook content, but 99% of everything else she does herself (to put this in perspective Dr Hazledine points out that she is managing an audience half the size of New Zealand!).

Dr Danielle Jones isn’t afraid to call out misinformation online, but she picks fights with ideas and not people.

Although she commands an audience of over 2 million, her primary goal in life is to be a “good person and a good mum.”

Audiences across the world have taken to her because she talks to them like they’re “real people, which they are!”

I get emails like “I’ve never got a pap smear and now I’ve gone because I understand why it is important.”

The transgender community has been incredibly helpful to me in learning how to use more gender-neutral language, especially talking about a field that has been so traditionally “gendered.” Jones gets messages saying:

“your platform is the only place which I feel like I can come and learn about gynaecological health as a trans man or as a non-binary person. Everywhere else just gives me such bad dysphoria.”

“I think that it is really important that those people have equal access to education” Jones explains.

If Jones could go back to her 18-year old self she would say: “learn Spanish. It will be extremely valuable for delivering labours in South Texas!” and also, “you don’t have to be perfect. You are smarter than you give yourself credit for, do what is right and follow your gut and you’ll make it”